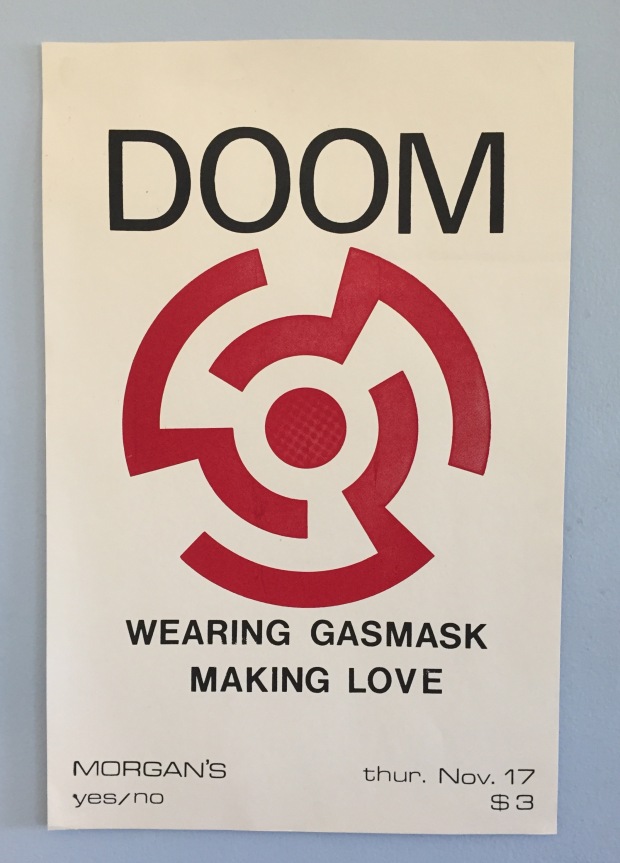 Blacksburg, VA, industrial/noise band from the late 80s, way ahead of their time. Show poster circa 1986/87. Unfortunately, I did not attend this performance; all I got is the lousy poster!

It’s been a while since I posted new video content, so today I uploaded the “Quasar Pulsar” video to YouTube. I’ve been placing stills from it in various journals over the past year (Otoliths, Angry Old Man, H&, etc). This one is pretty long at nearly 13 minutes, but the colors and movement may make it interesting enough to endure. Electronic soundtrack by Tone Ghosting. The text is the last stanza from my poem “Shit on a Stick Corporation”: “Quasar pulsar/beep beep/to the stars and all.” It refers to the noise pollution of televised advertising escaping into space, which some alien race light years away will have to deal with eventually. Why would aliens visit the Earth? To tell us to keep it down.

Stylus director Jim Adams posted the recording from the latest Stylus concert at Sonic Circuits 2017 to Soundcloud. This was a collaboration with French artist Astatine, involving an ensemble playing vinyl 7″ supplied by Astatine, supplemented by guitarists and video projections. Stylus exclusively uses Califone turntables sourced from elementary schools that updated their A/V equipment. As one of the turntablists, I find the description “pratfalls for multiple turntables” rather appropriate! More on the personnel and recording details below. You can check out the track on Soundcloud here.

In 2007, well-known harsh noise group Macronympha released a 7″ single on the Hospital Productions record label, called “Sex and Death.” There are two tracks, “Pussy Is My Soul” and “The Doom Pussy (Is Coming).” Both titles were taken from my story “Jaws of the Doom Pussy,” which was published in Malefact magazine, issue #4, back in 1997. The record includes an insert that has selections from the story cut out and pasted back together.

Just about everything in that paragraph is so obscure it requires a footnote, so allow me to explain.

I discovered the existence of this record last night while listening to a private press LP by one of my favorite “noise” artists, Runzelstirn and Gurglestock. While the demented piano playing and raucous cries spilled from the speakers, I decided to check the band’s discography on Discogs.com. Each time I added an R&G release to my wantlist, a line of “recommendations” appeared at the bottom of the screen. One of these was the Macronympha single, bearing intriguingly disturbing cover art. I clicked in to the release page for a closer look; there I saw the track listing. How could someone else come up with a line like “The Doom Pussy is Coming”? It was too close to my own work to be a coincidence.

Under “More Images, every part of the record is documented: front and back covers, record label, and two inserts. The final two pictures show an insert filled with solid blocks of words.On closer inspection, I recognized the text instantly. One of the musicians had collaged elements of the story from Malefact, creating a variation on the original. In fact, all the images on the jacket art could serve as illustrations for the narrative. 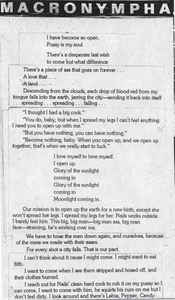 Macronympha has a long discography, having been active since the early 1990s, and is well-known in the harsh noise scene. This particular recording features original members Joe Roemer and Rodger Stella joined by Hospital Productions label boss Dominick Fernow . Fernow himself is a huge presence in the noise underworld, recording power electronics as Prurient and black metal as Vatican Shadow. I once saw Prurient on a bill with Wolf Eyes and Whitehouse. It was a great night for intense music and bleeding ears.

Given what I know of Fernow’s aesthetic interests (and those of Macronympha’s other members, as well), it makes sense the Doom Pussy story would have resonated with them, and that they would have seen Malefact. One of the best fanzines ever to come out of the Washington, DC, area, it mostly featured extreme, transgressive art with psychosexual, satanic, and psychedelic themes, often beautifully drawn by its editor, Tom Crites. Crites was also a huge fan of extreme music, including noise and black metal, and I can imagine he made contacts in those scenes. After I discovered Malefact, I wrote a short piece about it for The Washington City Paper (“Bureau of Smut,” 2/14/97); that’s when I met Tom and his domestic and publishing partner Sandy Smiroldo. Tom graciously allowed me to publish some of his graphics in my own fanzine, Mole. (Digression: I notice I spelled “Cthulhu” incorrectly in the article, and the WCP editors didn’t correct it!)

In The Headpress Guide to the Counterculture (2004, Manchester, UK), David Kerekes said this about Malefact 3 & 4: “One of the more pleasing art showcases, Malefact is a kind of Raw for the terminally apocalyptic. Running down the list of contributors ought to give clear indication of the type of subject matter on offer here: Miguel Angel Martin, Mike Diana, Nick Bougas, Trevor Brown, Sverre Kristensen, to name but a few. And if it still isn’t clear, how about serial killers on the job, huge ejaculating schlongs, and torture? Some of it is in comic strip, some of it big and bulbous full-page splashes. The artists in No. 4 have an even greater obsession with cartoon shit cakes.” (For the record, there is no reference to defecation in “Jaws of the Doom Pussy.”)

Somewhere along the line, I told  Tom and Sandy about the series of texts I had been working on featuring the Doom Pussy, a kind of warrior goddess at war with mankind; her weapons of choice were earthquakes triggered by bombs from a helicopter. They agreed the words would fit in well with the images in the zine. The stories are characterized by extreme sexuality, violence, magical practice, a performative writing style, and experimental techniques and structures. Easily the most intense writing I’ve produced, these texts have so far only seen light of day three times, all in long-defunct DC-based publications: two in a literary journal called Spoonfed, and once in Malefact. At the moment, I’m editing an anthology of all 19 Doom Pussy stories, potentially to be published later this year. It’s 275 pages of dense, eye-watering writing.

It seems appropriate that Macronympha would attach my words to their music and imagery. I don’t have a problem with it at all. It’s really a badge of honor. I just wish they had given me credit and sent me a copy of the record.