If you’re wondering what a grandmother sitting in a rocking chair has to do with science fiction, you’ll need to read my short story, “Ol’ Rocking Chair’s Got You,” which appeared yesterday in online dark fiction magazine The Chamber. The grandmother and her chair reside in the future on a distant exoplanet. The chair is a caregiving robot; and its care is not what it seems at the outset. You can read the full story here. The magazine releases a new issue every week, so if you are a fan of dark fiction, you may want to check it out.

The Chamber is an online magazine of contemporary dark fiction and poetry, with new issues release weekly. Yesterday’s issue included my story “The Robot Shell,” billed as “cyberpunk horror.” The story is set in a near future world where robot police control a population that lives mostly in vast slums. The heroine, Giga, ends up in jail after destroying one of the robots, where she meets her dissident hero and discovers the truth about the police. You can read it here.

Var (2x) is an online literary journal by the makers of X-Peri reserved for the most extreme literary experiments. I’m pleased to have (finally) made the cut with an excerpt from Floral Float Flume: Flue Flit Flip, a novel about AI units engaged in a series of marketplace transactions. This selection comprises about 18 pages, or the first four episodes out of ten. The whole story runs 70 manuscript pages.

The vocabulary of the piece is severely limited to words beginning with “fl-“. What you see is not a random selection of words but a precise narrative with specific meaning and syntax. Four letter words are operations; five letter words are objects. To start with, “Floral Float Flume” is the name of one of the transactional AI units, and “flue flit flip” translates as “enter offer profit,” a kind of “vini vidi vici” for transactional AIs.

If you dare, you can read the selection here.

An online literary journal for extreme experimentalism, X-Peri publishes new work every Monday. Today, my science fiction story “Pussy Bomb/Earthquakes Bring Confusion” appeared on the site, with an accompanying still image from my video “Succubus Highway.” You can check it out here.

This text is part of a series of pieces featuring Doom Pussy, a kind of Kali-esque figure engaged in a war against war…as well as gender, environmental destruction, and other by products of human activity. An editor at another journal once described a Doom Pussy story as “a cross between William S. Burroughs and Andrea Dworkin.” This should come with an NSFW warning for extremely graphic language and situations. So I’m especially grateful to X-Peri for publishing it.

Nevermind Outbreak. Last night, my wife and I discovered a movie on Amazon Prime that proved surprisingly relevant to the the quarantined shut down of American life. Despite its execrably cheesy science fiction surface, The Green Slime comes across as a prescient vision of America’s Space Force in action–fighting the contemporary menace of Coronavirus infection.

By now you’ve probably watched the above trailer, so the highlights of this festering pile of camembert are self evident: goofy model sets, astronauts blasting stuff in space, the female cast clad in silver go-go outfits, and monsters manufactured by guys hired away from the Godzilla franchise. And then the theme song: a groovy blast of psychedelic rock highlighted by acidic guitar solos and spooky theremin sweeps, while a guy sounding like Tom Jones belts out the silly lyrics! I’ve never heard anyone get so emotional while delivering the words “the green slime,” and I doubt you have either.

Although probably not strictly necessary, here’s a brief plot summary. A giant asteroid looking like a magnified COVID-19 blob threatens to collide with earth. The USA quickly rounds up its Space Force, lead by romantic rivals, which races off to intercept the threat. The force lands on the asteroid to plant detonators, while a scientist collects samples of a green substance that spreads over their moonmobiles. Some of the slime hitches a ride back to the space station, where it grows into Sigmund and the Sea Monsters’ cousins. The space station must be quarantined to avoid spreading the creatures to earth. Of course, destroying the station is the only solution, and the place is evacuated. Cue explosions. Slime contained and destroyed. Over and out.

Aside from that amazing theme song, the 1969 production holds some interest of its own, being a combination of flamboyant Eurotrash science fiction sensibilities, Japanese style monsters and modelwork, and efficiently tight Hollywood editing. Indeed, it was a collaboration between Toei, who contributed a director and locations, and MGM. It’s not surprising that Mystery Science Theater 3000 used it for their pilot episode, as it’s ridiculously easy to throw mockery at the absurd delights appearing before your eyes.

Irony free drive-in fodder like The Green Slime is an easy watch that goes well with crunchy snacks and alcoholic bevvies of choice. (I can personally recommend an Aviation cocktail or four, but that’s the current house favorite.) But it’s not often that these films resonate with current events. In these grim times of pandemic quarantine amidst a backdrop of official buffoonery, one needs a little laugh. Around here, we’ll be singing the “Green Slime” song to get us through the long, nervous days. You might try it yourself. 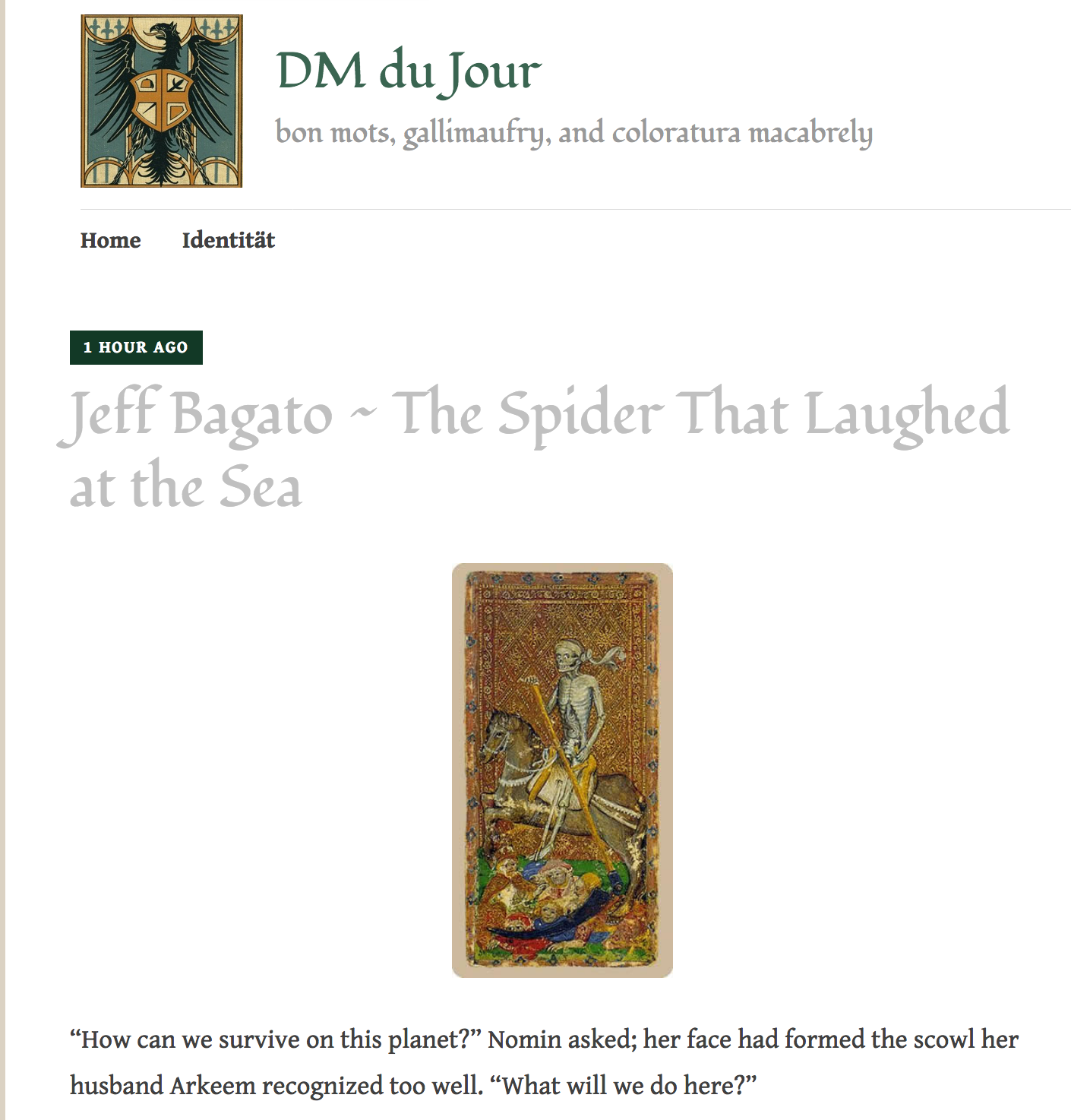 Danse Macabre du Jour posts dark and atmospheric fiction and poetry on a daily basis as an adjunct to the periodical Danse Macabre. I’m very pleased that my short science fiction story “The Spider That Laughed at the Sea” appeared today. You can read it here.

In the story, a dysfunctional family lands on an unfamiliar planet, hoping to find a suitable place to set up a home. Their search for food leads them to a a cluster of giant spiders on the beach of a milk white sea. Lured by the temporary paradise they find there, the family becomes part of their new world.

My new music video “No Eyes Remain” on YouTube depicts a far future where humans explore outer space as pure energy forms. The video text reads “no eyes remain to record the facts,” taken from my unpublished poem “Early Observatory,” part of my “Civilization’s Lost” series examining the fragility of human language, culture and civilization. The electronic soundtrack is Tone Ghosting’s “TGV.” Best played loud through speakers or headphones with a wide dynamic range. Click the link above to play the video.

Online literary journal Danse Macabre, “a magazine of the imaginative, the magical, the ethereal, the supernatural, the dark, the absurd, and  the unknown,” released Issue 119 “Les Etrennes” today. The works of the authors you see above are joined by one of my Doom Pussy stories. A violent rant from a Kali-like figure at war with mankind, “Pussy Pulls the Trigger” should come with one of those NSFW warnings, as it is intended only for a mature audience with strong constitutions and a taste for extreme, transgressive literature. Anyway, you can read the full text here. 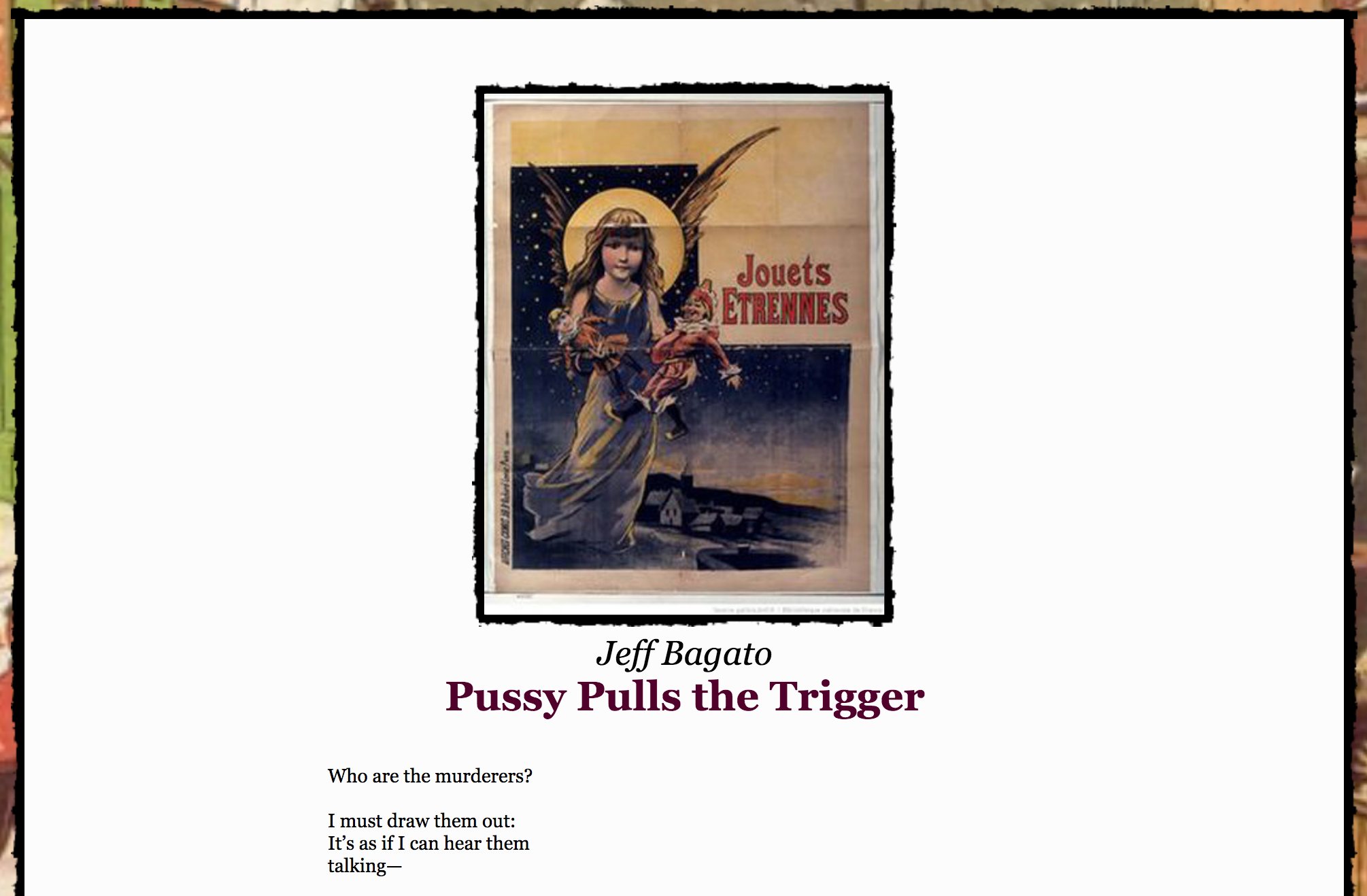 Online literary journal Former Cactus published their final issue, #14, on Dec 1. It includes a wide range of poetry and flash fiction. Among the works is my short science fiction story “Old MacDonald Had an Ichesthaet.” It’s set on a future earth where all surviving humans exist in deep freeze. One man is revived to advise the lead scientist conducting an archeological dig to learn the secrets of Earth’s past. The alien scientist  has found something that he expected, but it comes as a shock to his human consultant. You can read the story here. 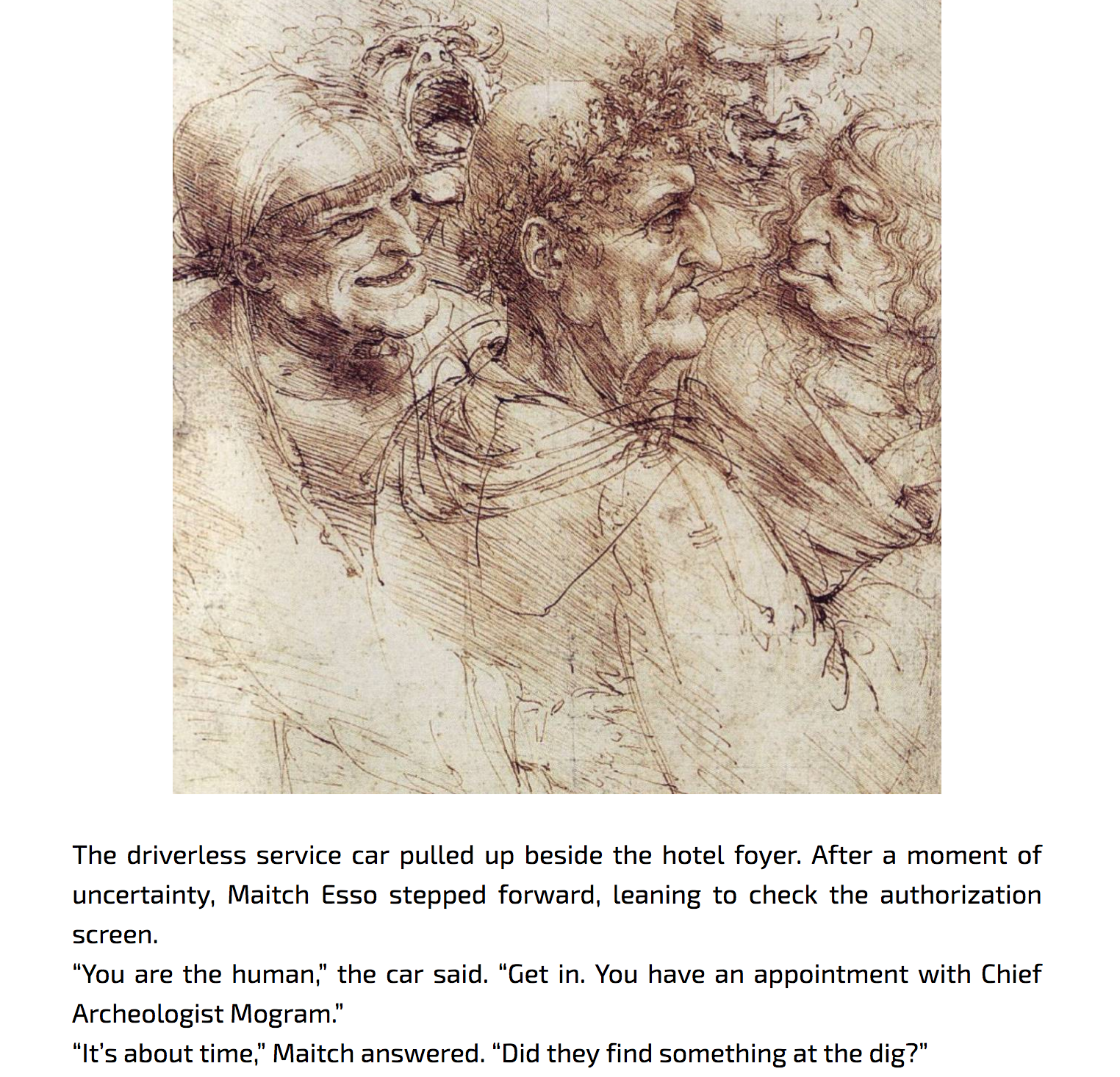 One of my short stories featuring the Doom Pussy appeared yesterday in online in outlaw literary journal The Scum Gentry. Upon accepting it, the editor remarked on its “strong Burroughsean flavor and blatantly trangressive and demented tone,” which I thought nailed it pretty well. He summarized it this way: “Pussy, Doom and Smash lay waste to their world in this experimental psychosexual sci-fi riff.” Needless to say, this involves strong language that is NSFW and for mature audiences only. Read at your own risk here. 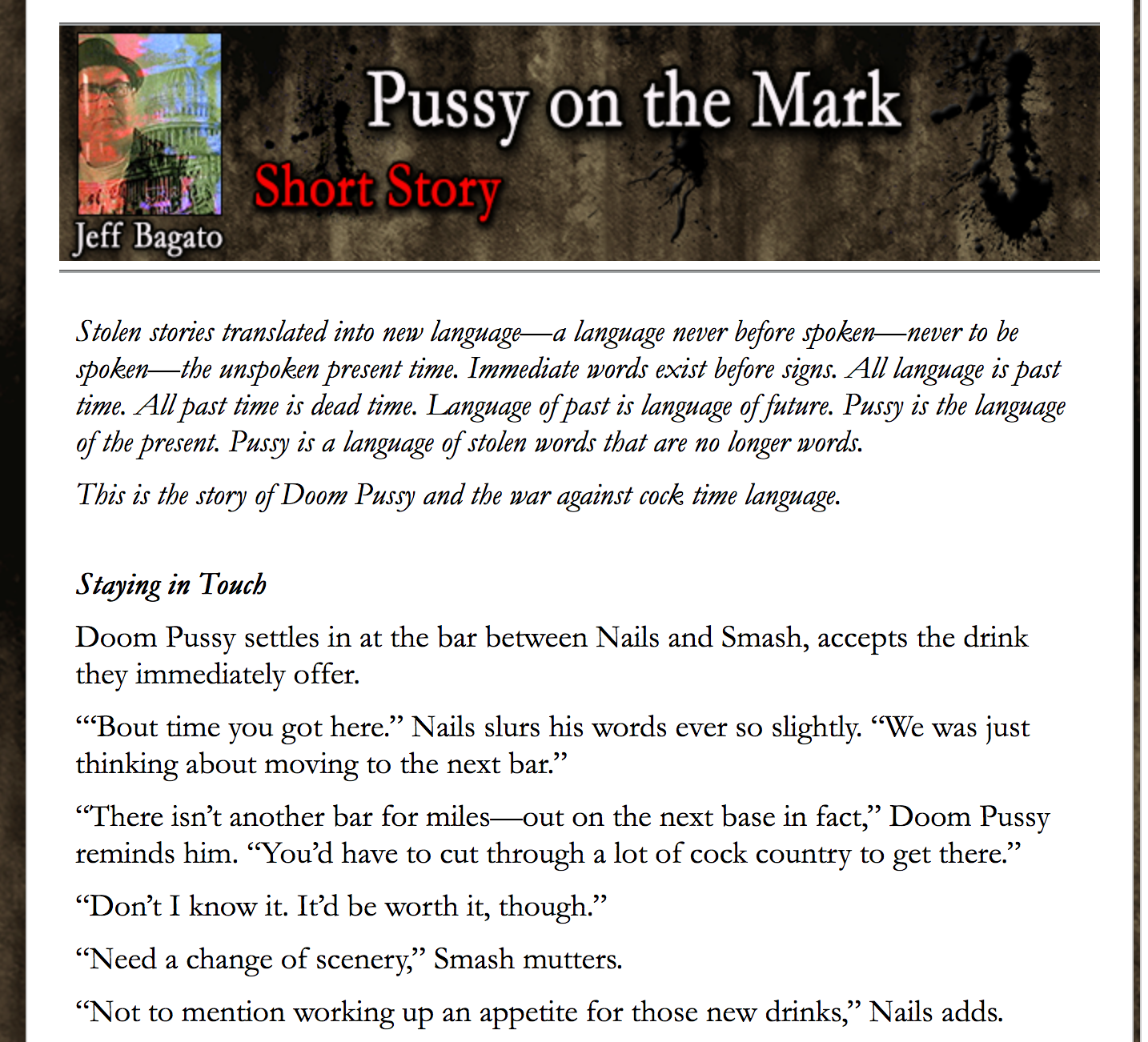