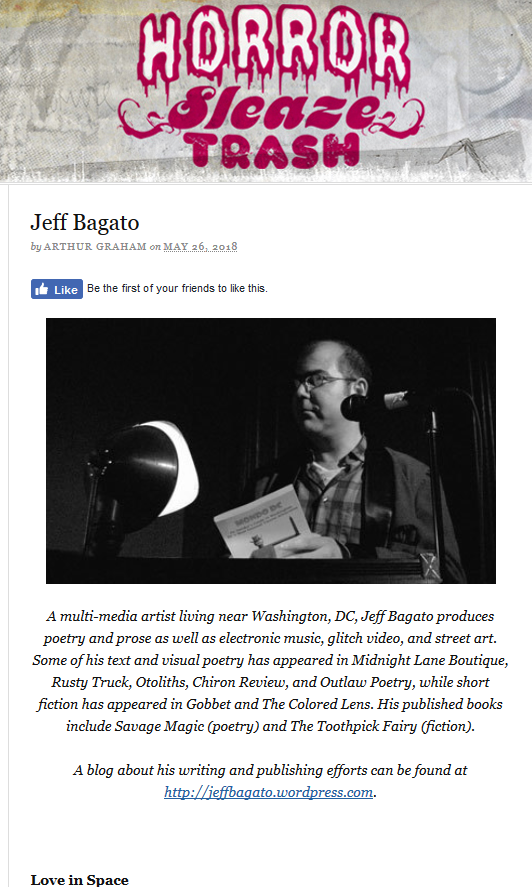 Online literature and underground culture journal Horror Sleaze Trash published my science fiction story “Love in Space” today. This is one of a few pieces featuring the character Jean Savage. This one should come with some kind of trigger warning for the extreme sexual situations, but there is a deeper literary purpose. You can read it here.

It’s kind of funny how the editor dug up that photo from an Internet search. One never knows the things that are floating around out there.

Today I approved the proof copy of Savage Magic, a collection of poems featuring my character Jean Savage. This was the second proof, as I found an error in the first one: a space was omitted between the title and text of one poem. In a month or so, this book should be live on Amazon. At the moment, it’s available on Lulu.

Here’s the back cover blurb I wrote for the book: “[Savage Magic] collects all seventeen poems featuring the philosophy, life hacks, and adventures of Jean Savage, the heroine of the author’s avant garde science fiction novel Savage Night, as well as several short stories which also explore the potential of this rhetorical anima. Violent, erotic, polemical, and mystical by turns, these texts define a poetics of self-actualization and anticapitalist defiance in a mass media ecosphere using images of magic, sexuality, nature, paganism, graffiti, and crime. Something of a cross between a song of self and a rant against the machine, these works offer an obsessive, personal, and rhythmic cleansing and revenge, constructing a hermitage and then defending it from society’s commercial, hierarchical, and fraudulent tendencies.”

I had published four of these poems in my earlier collection Spells of Coming Day. When I recently located a box of old manuscripts, I was surprised to find so many other poems also featuring Jean Savage. I also found three stories I’d forgotten I’d written using the same character. A collection of those stories is planned for release this year under the title, Savage Space.

I’m especially happy with the covers for these companion volumes. The image is the result of experiments with analog video run through a video effects box called the Opti-Glitch, made by a Jacksonville, FL, duo working as Tachyons +. I haven’t had much time to work with my growing collection of video synths and effects, but the images are amazing. Mostly I’ve used the movies as backdrops for live performances. The still photographs make such great cover images I’m planning to use this much more often, especially since a photograph is very easy to work with in creating a cover design in Photoshop.

I had the happy surprise last week of finding a bunch of my old manuscripts stored in a box. How old? Well, most of them are dot matrix prints, some even on that tractor feed paper. Among the files of old poems were several things I’d totally forgotten I’d written: a long poem, two incomplete novel manuscripts, and three short stories. Some of this material could work as new books: a poetry collection and a short story collection.

The long poem centers on my character Jean Savage, who features in my novel, Savage Night, and several stories published in that same collection. Jean is sort of an anti-establishment figure who uses magic, sex, and violence in her mission of self discovery and rebellion. I also wrote a few poems with her in them, four of which made it into my collection Spells of Coming Day. Looking through the sheaf of old poems in the box, I realized there were more Jean Savage poems than I remembered. Ideally, there are enough for a short book. The long poem, Jean Savage Magic, seems pretty good on first read, so I’m hopeful the others will hold up as well.

The discoveries set me off in search of more complete poetry print outs, and I eventually located the notebooks where I had put everything. Then I searched for the backup discs, so I wouldn’t have to retype all this stuff. I couldn’t find any CDR backups that included these items, so I started looking at old floppy discs. I still have a pile of 3.5″ and 5″ floppies, and an auxiliary reader for the smaller ones.

One of the 3.5″ discs had a bunch of old poetry files, so I’ve been able to copy the short Jean Savage poems. But the long one continues to elude me. Maybe it’s on one of the other discs. The search continues.

The stories are from a series I did around the theme of “sex in space,” which Ducky Doolittle was supposed to publish in the 1990’s. One of the stories made it into my collection, Savage Night and Other Stories, but the remaining ones didn’t make it because they were hidden away.

I’ve been trying to keep my manuscripts organized as I write and publish them, particularly as I’ve been going back and revising stuff for publication. Looks like I still have a ways to go before everything is in order.