According to the synopsis, this book is: “Translated and Entirely Updated by Rosanna Hildyard. Though ostensibly Surrealist, Alfred Jarry’s 1888 play Ubu Roi bears disconcertingly close resemblance to America in 2017. This new version, which brings Ubu to the USA, is a bombastic, irreverent romp through the misadventures of the titular usurper of the White House, with a sharp eye for materialism and political infighting.”

I was actually pleased to see that someone else had made the Ubu/Trump link. Last year, I resurrected the “Ubu for President” campaign posters I made during one of the Obama elections. Some of these actually made it into paper boxes on the streets of DC in 2016. The first photo shows one of my posters in situ, collaged with the remains of a Washington Examiner magazine cover depicting the soon to be Dear Leader. Unfortunately, I got lazy and didn’t do much with this postering campaign. 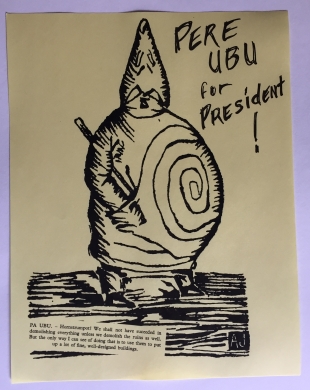 “Pere Ubu for President” was meant to be a joke. The text on the poster, referring to Ubu’s real estate development concepts, was a broad reference to the Trump organization’s modus operandi. Who would elect an obese, raving, ignorant sociopath, dressed in a kind of KKK outfit, as a leader? Now we know the answer to that.

Having never read Hildyard’s adaptation, I can’t recommend it over the original. If you have not read Jarry’s play, now’s the time. It’s a remarkably adept likeness of the Tweeter in Chief, performed only once in 1896. On the play’s opening night, it caused riots in the audience, starting with Ubu’s first pronouncement, a corruption of the French word for feces: “Merdre!” You can easily find copies of Ubu Roi available on Amazon. Once, the title was translated as “King Turd,” just to let you know the general zone of the satire involved.

When you’re done reading about King Ubu, you can read Jarry’s two sequels: Ubu Cuckolded and Ubu Enchained. It could be likely these plays spell out the full trajectory of the current regime!