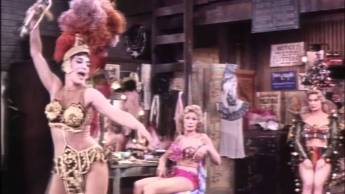 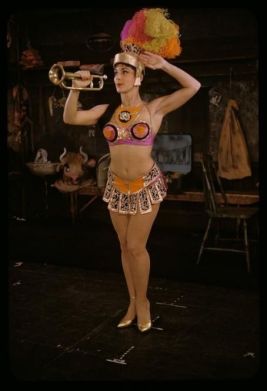 Nonagenarian. Perennial candidate for Mayor of DC. DC Statehood activist. Burlessque dancer. Actress. Comedienne. Cabaret performer. Faith has done many things. Once upon a time, she was a key component of the Broadway musical Gypsy, in its original run with Ethel Merman, as well as the film version with Rosalind Russell, Natalie Wood, and Karl Malden. Faith developed the role of Mazeppa, an aging burlesque dancer who blows a bugle while doing her bumps and grinds. She schools the young Gypsy Rose Lee on the necessities of stage life in the song “You Gotta Have a Gimmick.” Contemporary reviews of the stage version and YouTube views of the movie version show Faith stealing the show with sassy hip snaps and a voice that could peel paint off your wall.

I first met Faith circa 1998 when she was doing her Campaign Cabaret performances in various nightspots around DC, adopting show tunes and calypso numbers to serve as self promotion, accompanied by her husband Jude on guitar. Film auteur Jeff Krulik (of Heavy Metal Parking Lot fame) was acting as their manager and booking the gigs. It’s hard to forget such a magical entertainment. Some images are more indelible than others. Like seeing a 75-year-old Faith rollerskate onto the stage in a nude body stocking to blow her bugle.

Recently while at work in George Washington University’s Burns Law Library, I ran across a book called Choreographing Copyright: Race, Gender, and Intellectual Property Rights in American Dance by Anthea Kraut. The back cover blurb mentioned Faith’s lawsuit against the producers of Broadway’s Gypsy for infringing on her copyright to Mazeppa’s dance routine. She had developed the number during her time on the actual burlesque stage, and reprising it during audition got her the part in the play. The climax of her performance made it a unique signature and brought the house down: bending over to blow her bugle between her legs, derriere facing the house. This “derriere pose” was deemed too risque by the film’s director, so she did a deep back bend instead, which is what you see in all the pictures. The case turns out to have been an important one in the struggle to gain copyright protection for dance choreography. But Faith was unsuccessful in gaining damages. The judge ruled that her dance–and the story it purported to tell of an ex-military woman now earning her living on vaudeville–was not significant enough to warrant protection, being both too low-brow and created by a woman.

I interviewed Faith extensively back in the 90s, writing a short article on her for The Washington City Paper (you can read it here), and later publishing the full transcript in my fanzine Mole. Over 30 years after her lawsuit, she was still angry about the copyright rip off,  But it was hard to tell if the story was just a part of her self-myth. It was great to see it confirmed in a big way.

Using the article in Kraut’s legal monograph as a hook, I put together an exhibit for the display case in the Burns Library about Faith, her copyright lawsuit, and her mayoral candidacy. Included are vinyl LP copies of the soundtracks for both stage and screen versions, photos from her 90s cabaret shows, campaign ephemera, and a dented and warped old bugle I got on eBay. In fact, Krulik told me to get a beat up horn “just like the one Montgomery Clift gave her.” You see how the legend of Faith just seems bottomless? There’s always another amazing story about her. If she makes a visit to the exhibit, I’ll let you know.